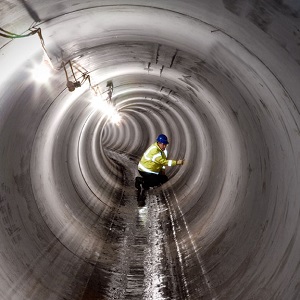 Barhale were awarded this £6.4 million scheme by Severn Trent Water
to upgrade the sewerage system within Albrighton, Shropshire.
The village of Albrighton had experienced substantial flooding in
recent years, due to lack of capacity in the existing sewerage system,
coupled with the volume of surface water flowing into a local brook.

Barhale offered an innovative solution to the client through carrying
out micro-tunnelling to a curved profile. This was one of the first
micro tunnels in the UK to be cut on a curve through rock and
provided a £300,000 cost saving to the client, Severn Trent. 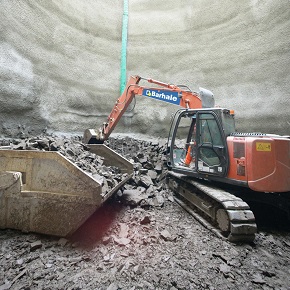 National Grid supplies electricity through transmission networks, operating at 400kV and 275kV which connects to the three substations at Hackney, St John’s Wood and Willesden to supply points where power is fed into the local distribution system.

Within London, a network of 275kV cables were installed in the 1960’s which needed replacing, as they had reached the end of their technical life. Due to increasing electricity demands, the cables were upgraded and replaced with 400kV cables which were installed within a deep level tunnel. 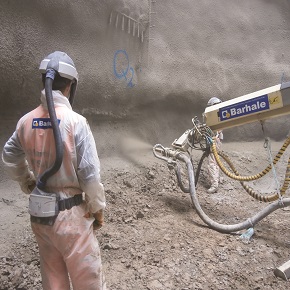 Barhale undertook a technically challenging project in Holborn, in central London, working for BFK under the Crossrail project.

The scheme involved constructing a 30m deep shaft solely through the use of sprayed concrete lining (SCL) technique, due to its flexibility in use. The shaft will be used for access into the underground tunnels. 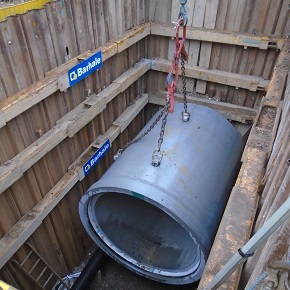 Through their expert tunnelling experience and customer care, the Barhale team at Wyke Gardens, Ealing, were able to greatly reduce long standing flooding in to the River Brent, whilst maintaining traffic flows and customer relations in a densely populated area of west London. The Wyke Gardens storm water network in west London had a history of regular flooding and discharges into the River Brent. These discharges were polluted with foul water flows from 40-50 illegal or misconnections to the storm water network.

Barhale was selected by Thames Water to:

Construct a new CSO chamber and online storage tank to reduce the discharge events and provide a new static screen to remove the solids from any overflows.

The works were based in and around the busy A406 (North Circular Road), leading to and from the Hanger Lane Gyratory System – one of the busiest junctions in London, which incorporates 10,000 vehicles an hour. 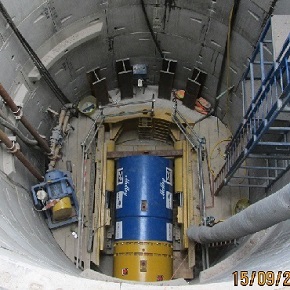 The Green Lane (Great Western Road) Project on behalf of BFK/Crossrail involved the construction of 6 shafts (by underpinning method) and nearly 600m of pipe jacking.

The scheme was required as the existing sewer going under Network Rails Great Western Rail lines and London Underground would have clashed with the new Crossrail line. As a result, the existing sewer was abandoned and replaced with a new 1.2m pipe at a lower level. As part of the works, Barhale were responsible for the detailed design of the scheme involving consultation with Thames Water, Network Rail and London Underground. Initial works involved the location and diversion of all services at the shaft locations including Gas, Water, Electrical & Fibre Optics.

The Kingsway tunnel was built in 1906 and once carried trams between Aldwych and Holborn. It had been used by the London Borough of Camden for storage since its closure in 1952 but it has now been reopened by Barhale, sixty years later, to enable an essential grout shaft to be constructed.

This was an extremely interesting and challenging site location due to space constraints, media interest and the fact that the tunnel was a protected heritage structure. 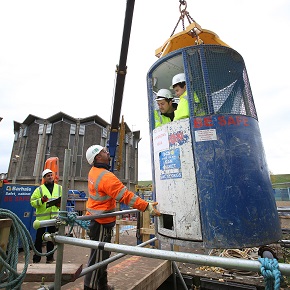 Datchet Pumping Station (PS) is a key asset and up to 60% of London’s daily water demand can be met by the twin intakes from the Thames. When the decision was taken to switch it off, to enable Barhale (via the Optimise joint venture) to complete the essential Tunnel Relining project, Thames Water needed to grasp the opportunity to successfully complete all outstanding remedial work in the station at the same time.

The Datchet project is part of a programme of relining being carried out by Optimise. With 3km relining at Wraysbury and 1km from Queen Mother Reservoir to the pumping station already completed, the Datchet stretch will be followed by a 3km section from the Queen Mother to the outlet.