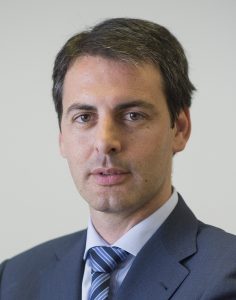 The body overseeing the expansion of the Midland Metro has a new man at the top.

Alejandro Moreno has been appointed as director of the Midland Metro Alliance.

He is currently managing director for central Europe for Colas Rail, one of the partners of the alliance.

Prior to this he was general manager of Tranvia de Zaragoza in Spain, where he gained experience in delivering a catenary free tram network – which will be a feature of the extension now being built from Birmingham’s New Street station to Centenary Square.

He said: “I am very excited to be leading the Metro Alliance.

“I look forward to utilising my experience to ensure the Midland Metro is at the forefront of an integrated transport system the West Midlands needs to enable its ambitious plans for economic regeneration.”

The Midland Metro Alliance is a team of planning, design and construction specialists building four new tram extensions over the coming decade on behalf of the West Midlands Combined Authority (WMCA).

It consists of the WMCA, which owns the Metro, rail construction specialists Colas Rail – with Colas’ partners Colas Ltd, Barhale, Thomas Vale, which is part of Bouygues UK, and Auctus Management Group – and a consortium of design experts from Egis, Tony Gee and Pell Frischmann.

Mr Moreno replaces interim director Iain Anderson of Colas Rail, who oversaw the formation of the alliance and has now returned to Colas.

Phil Hewitt, Metro programme director for the WMCA, said: “Everyone at the alliance is delighted at Alejandro’s appointment.

“He has an extensive range of business, operational and major project experience and a clear passion for and strong commitment to the success of the alliance in line with its established principles.”

Work is now underway extending the route from New Street Station to Centenary Square, with services expected to start running in 2019.

A key feature of this will be trams running through Victoria Square without overhead power lines – a UK first.

Funding has also been earmarked for the line to go further along Broad Street, past Five Ways and on to Edgbaston by 2021.

The route of an extension through Digbeth in Birmingham has also been chosen, running from Bull Street via Albert Street and on to the forthcoming HS2 high speed rail station at Curzon Street.

From there it would go along New Canal Street and Meriden Street into High Street Deritend, stopping at Digbeth Coach Station and the Custard Factory. It is anticipated the line could be open by 2023.

In Wolverhampton work has begun on the £18 million city centre extension, with completion also scheduled for 2019.

The route will take trams along Pipers Row, stopping directly outside the bus station before continuing on to the railway station which will also be redeveloped as part of the Wolverhampton Interchange Project.

A business case is also being prepared to extend the Metro from Wednesbury to Brierley Hill.