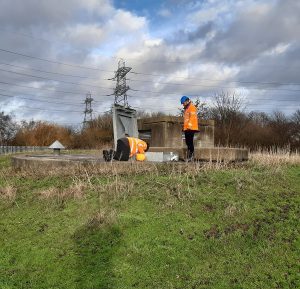 The completion of a structural integrity survey on a 3km length of water tunnel in North East London will draw to a close a five year programme of work by civil engineering and infrastructure specialist Barhale under Thames Water’s Tunnels and Aqueduct programme.

Since 2015, working through Skanska, MWH and Balfour Beatty (SMB), delivery partner for Thames Water’s eight2O alliance, Barhale has inspected almost 90km of tunnels. In the process it has completed 36 separate commissions at a value of £15.5 million.

The most recent and final contract has been to isolate, dewater, clean and carry out a statutory structural integrity survey on the 1.8m diameter raw water tunnel feeding the Coppermills Water Treatment Works in Walthamstow.

Although Thames Water is now dissolving the eight2O alliance and is moving to a direct model, Barhale has been appointed to the utility’s new AMP7 framework for both infrastructure and non-infrastructure work – maintaining a working relationship which dates from 2004.

Steve Best, site agent at Barhale, who has led on many of the projects highlighted some of the more unusual challenges the team has come up against.

“We have visited some of the longest and deepest tunnels on the network,” he said. “They include the Thames Lee Tunnel which is 36km long and delivers water from South West to North East London and six potable water tunnels each of which its typically 50m deep.”

“One of the most interesting things though is how often residents have no idea the scale of infrastructure which is right under their feet. On the Thames Lee Tunnel there is an access shaft which intersects two private gardens. Until we went to inspect it, the owner had no idea that the small manhole cover in her garden was an opening to a 5m diameter, 45m deep shaft on to a 36km tunnel.”