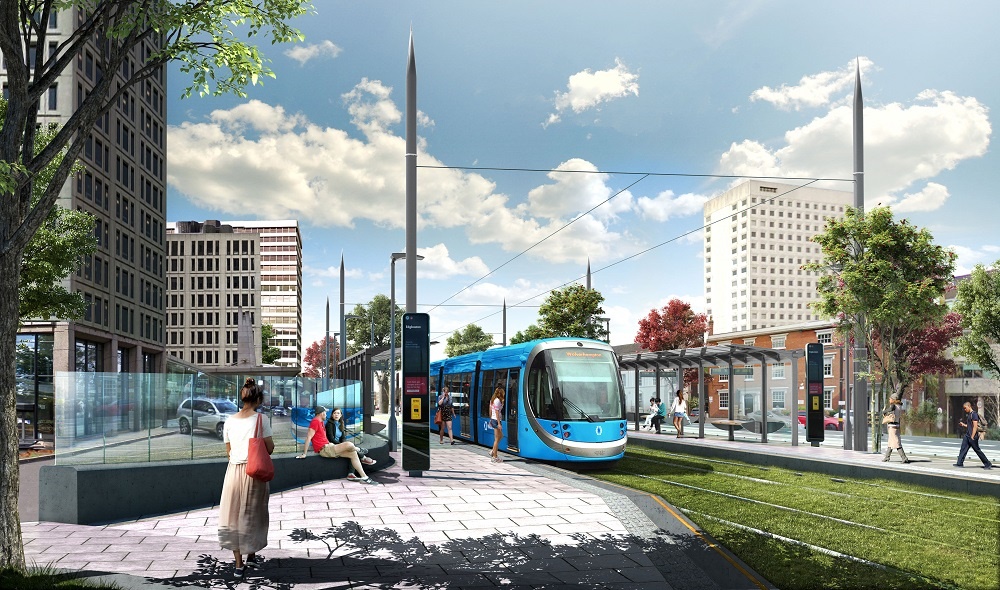 Traffic diversions are to be implemented on Broad Street from Monday 2 September as work to extend the West Midlands Metro to Edgbaston enters a new stage.Bus services 9, 10, 12, 12A, 13, 13A, 126, X8, X10 will not stop along Broad Street between Monday 2 September and spring 2020, while this essential work takes place. Services 23 and 24 travelling out of the city will also be diverted.

Cars, taxis and delivery vehicles will be able to access Broad Street between Sheepcote Street and Gas Street. The many hotels, bars and restaurants in the area and Five Ways roundabout will remain open for business as usual. Construction in Five Ways underpass is progressing well following its closure earlier in June and will remain closed until the Metro extension is completed in 2021.

Speaking of the essential traffic diversion, Anne Shaw, Director of Network Resilience at Transport for West Midlands (TfWM), said: “As construction of the Metro continues along Broad Street, we’re asking those people who normally travel in and out of the city via Broad Street to check how their journeys are affected before they return to school and work in just over a week’s time.”

The next stage of activity on Broad Street is part of the Birmingham Westside extension, which follows the Metro extension from St. Chads to Grand Central, which opened for passenger service in May 2016. Once completed, the Metro will operate between Grand Central and Hagley Road in Edgbaston, improving transport links in the heart of Birmingham, making journeys faster and more accessible, in turn helping businesses and supporting more jobs.

Construction for the new route commenced in June 2017, and along with four other tram extensions in the West Midlands, is being planned, designed and delivered by the Midland Metro Alliance on behalf of Transport for West Midlands, the transport delivery arm of the West Midlands Combined Authority (WMCA), which has embarked upon an ambitious plan to boost the region’s economy and provide new opportunities for residents and businesses.

This phase of work in Broad Street follows on from work earlier this year on the Broad Street Canal Tunnel. Midland Metro Alliance completed strengthening works on the 18th century structure and ensured the local landmark was re-opened ahead of schedule. The team are currently in the final stages of construction on the extended tramway to Centenary Square, which is anticipated to open by December 2019, providing swift and sustainable public transport via tram to heart of the city’s vibrant entertainment district in Broad Street.

Michael Thomas, Project Lead at the MMA, said: “We recognise that there will be some disruption to those living, working, travelling and visiting the city during this vital next stage of Metro works. We continue to work with partners and transport operators to minimise the impact on the travelling public.”

For information and to check how your journey may be affected, please visit: www.networkwestmidlands.com/fiveways