Last week, people living, working and visiting the centre of Birmingham were excited by the discovery of an old footpath unearthed during excavations in Victoria Square as works progress to build the Metro extension.

Since discovering the path, archaeologists, working on behalf of the Midland Metro Alliance, have been studying the cobbles and surrounding area and now believe the footpath is likely to be 18th or 19th century in origin. The team also suggest it once may have been part of an earlier extension of Pinfold Street. 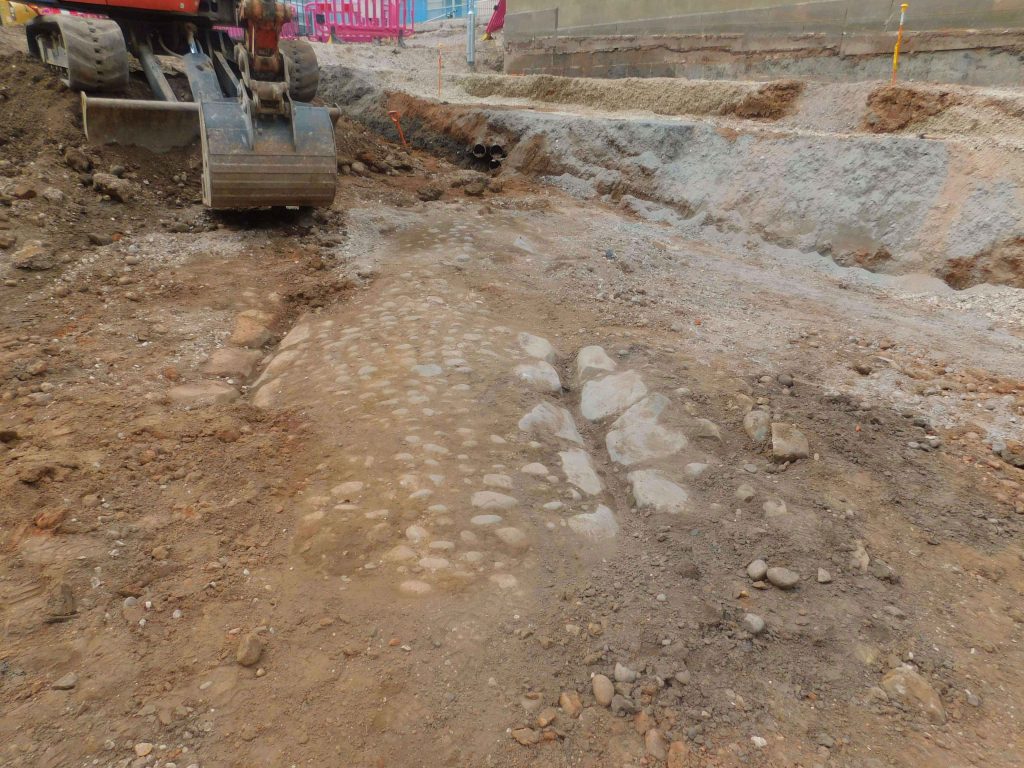 Laurence Hayes, Archaeologist for RSK, said: “This is a very interesting find in the heart of the city centre. The artefacts we have recovered from the surface of the path and beneath it include porcelain, clay pipe and building materials which date to the post-medieval period. The road is probably part of the city’s expansion in the mid-18th century, and went out of use in the Victorian period. We will be carrying out further work in the coming months to examine historical maps and the artefacts we have removed from the site in order to build up the full picture.”

Since the path has been discovered, the Midland Metro Alliance has welcomed the increase in visitors eager to catch a glimpse of the path. For those not yet able to visit, it will be on show until Wednesday 27 June 2018, at which point it will be excavated as part of the preparations for the new Metro extension.

Natalie Cropp, Sustainability Manager for the Midland Metro Alliance, said: “Working with archaeologists, we’ve been able to capture complete records of this piece of Birmingham’s history that we have uncovered, including surveys, physical pieces, photographs and video. The Midland Metro Alliance works closely with the local community and these pieces will make a great case study and educational piece for schoolchildren which highlights the hidden histories which are all around us beneath our city streets.”

Steve Grimes, the Midland Metro Alliance’s Project Director for the Birmingham Westside Extension, said: “There is always potential for items of historical importance to be uncovered during construction, and the discovery of the footpath provides a fascinating look at Birmingham in days-gone-by.”

This is not the first time that a historical find has been unearthed during the works to extend the West Midlands Metro. Roller shutters, also from the Victorian period, were discovered at a shop in Pinfold Street earlier this year.

The extension, designed and built by the Midland Metro Alliance working on behalf of the West Midlands Combined Authority, is the next phase of works following the tram extension from St. Chads to Grand Central, which opened for passenger service in May 2016.

The ambitious plans will see the new line operate between Grand Central to Hagley Road in Edgbaston, improving transport links to and from the west of Birmingham, making journeys faster and more accessible, in turn helping businesses and supporting more jobs.

Five new tram stops will connect passengers to Victoria Square, Centenary Square, Brindley Place, Five Ways and Hagley Road, with links to popular attractions including the Birmingham Museum and Art Gallery, the International Convention Centre and Symphony Hall, allowing more people to use the tram in this area for day-to-day travel, reducing road congestion in the city centre, as well as improving sustainable transport options along Broad Street and beyond.

The first phase of the works will take the route from New Street Station to Centenary Square, with services expected to commence in late 2019. The second phase will continue to Edgbaston, and is planned to open in 2021, in time for Birmingham’s hosting of the Commonwealth Games, for which transport improvements in the city, including the tram extension, will play an important part in delivering a successful event.