Essential maintenance and upgrades along the tramway on Corporation Street have been completed following successful testing and commissioning of the new track laid over the summer.

The works, which got underway towards the end of July, were carried out as part of a commitment by Transport for West Midlands (TfWM) to invest in game-changing new lines along with ensuring that the existing route also sees similar investment.

Midland Metro Limited, the operator of West Midlands Metro, is preparing to undertake additional activities, following which trams are expected to return to serving all stops in Birmingham city centre. Customers are being advised to follow West Midlands Metro for service updates. 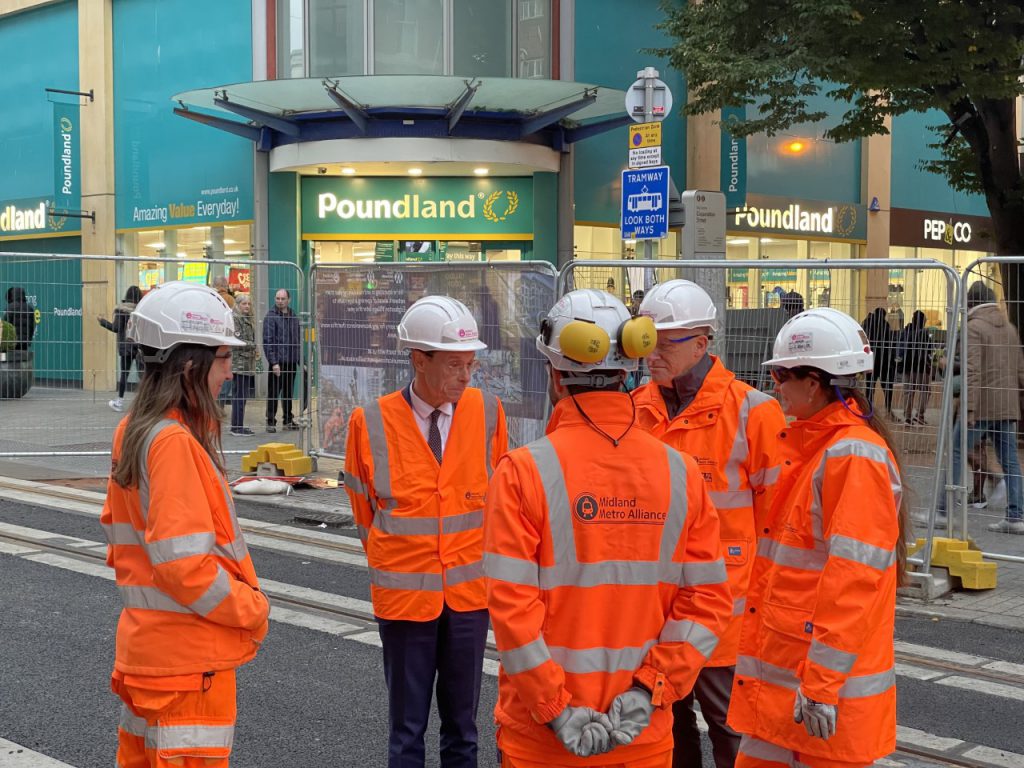 Andy Street, the Mayor of the West Midlands, said: “The team from Midland Metro Alliance have been working solidly since the summer to complete this essential activity as soon as possible, and I want to thank them for their hard work in ensuring this work was completed on time and to a high standard. I’m sure all in the city centre will be pleased to see the West Midlands Metro back in the heart of Birmingham, meaning people can get out and about more easily and enjoy what is on offer as we look forward to the festive season.”

This complex engineering project has seen more than 300 people employed, many of them local to the West Midlands. The works involved breaking out the road and existing rail before innovative pre-cast concrete bases were installed to hold the new tracks.

The replacement rails were then laid and welded into place after which the remaining concrete and road surface were installed and the traffic, tram signalling and overhead lines reinstated.

Stephen Christopher, Construction Director at Midland Metro Alliance, said: “A total of 75,000 working hours were recorded as we worked during the day and night to complete this important project. We would like to thank the local community for their patience and understanding since work got underway in the summer.”

As well as replacing track on Corporation Street, the team at Midland Metro Alliance, which is designing, planning and building extensions to the Metro on behalf of TfWM, also commenced work on the installation of a complex delta junction on Lower Bull Street. This will eventually allow passenger services to travel along multiple routes in the Black Country and east and west Birmingham as these extensions come online. This complex part of the Birmingham Eastside Metro extension won the Outstanding Engineering Achievement category at the annual Global Light Rail awards earlier this month, eclipsing similar projects in California, Qatar and Spain.

Midland Metro Alliance has handed back the tramway to Midland Metro Limited and local people are being reminded that there will be some tram traffic ahead of full service resuming as final testing is completed.

Sophie Allison, Commercial Director for Midland Metro Limited, said: “We’re looking forward to resuming full tram services. This is great news for customers, and we’d like to thank them for their patience whilst the works were taking place. As part of our continued investment in the existing line, there will be localised maintenance taking place during November and December which people can read more about on our website.”