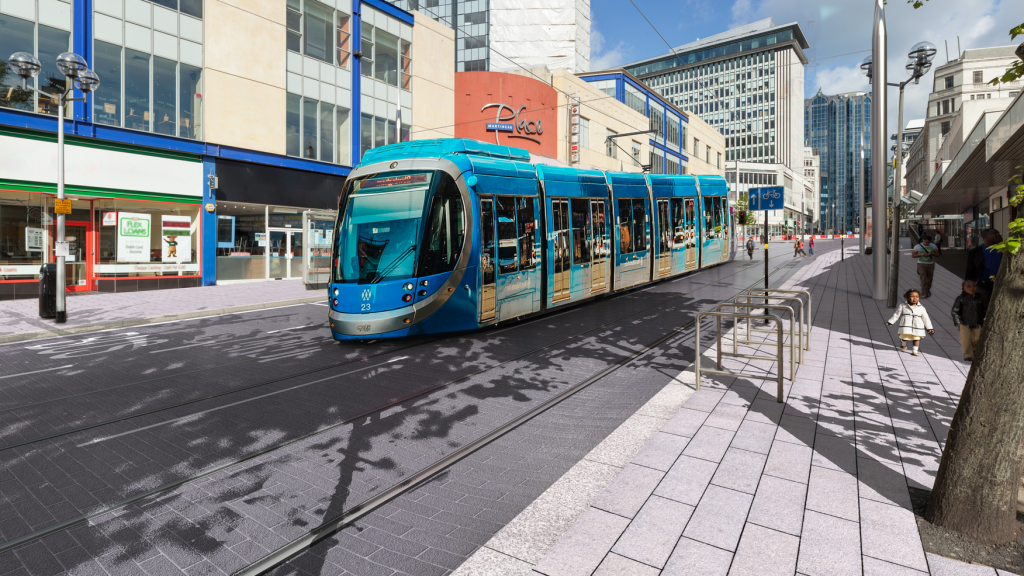 The West Midlands Metro extension linking Digbeth with the city centre will enter main construction later this spring when works to construct a tramway junction at Lower Bull Street and Corporation Street get underway.

To allow new track to be laid for the much-anticipated Birmingham Eastside Metro extension, Lower Bull Street will close to all traffic during construction while pedestrian access will be maintained at all times. This next phase of works will follow the completion of utility upgrades and diversions in the area.

Midland Metro Alliance (MMA), which is planning, designing and building the scheme on behalf of Transport for West Midlands (TfWM), will carry out further works in the summer to connect the new tracks with the existing line at Bull Street ahead of passenger services opening to a new terminus in Edgbaston later this year. West Midlands Metro (WMM) services will terminate at an alternative location in the city centre while these works are carried out and further details will be confirmed over the coming months.

Peter Cushing, Director of Midland Metro Alliance, said: “The expansion of the Metro to the east of the city will make it easier for those living, working and travelling in Birmingham to get around. This is an exciting scheme which will help transform and support the regeneration of Digbeth by improving connectivity and making the most out of HS2. I am delighted that we will be starting construction shortly and look forward to seeing progress made on the project over the coming months.”

Michael Anderson, West Midlands Metro Projects Director at Transport for West Midlands, added: “Whilst these works across the city are ongoing, it is important for people making essential journeys to plan ahead and to use public transport if possible as this will reduce the number of private vehicles in the east of the city which will help to keep everybody moving. We are working closely with Birmingham City Council, local Business Improvement Districts, Transport for West Midlands and public transport operators to minimise our impact and help keep people moving when works begin.”

The £227m Birmingham Eastside Metro extension, which saw utility upgrades and diversions get underway earlier last year will run from Bull Street, in the city centre, to Digbeth, adding four new tram stops to the Metro network. More than half of the 1.7km route is planned to be free of overhead wires, similar to the recently opened extension from Grand Central to Centenary Square.

The construction activity set to get underway in the spring will mean that buses serving Lower Bull Street will be diverted to proposed additional stops at Albert Street, Corporation Street, Dale End and Moor Street Queensway. Provisions will also be put in place to allow West Midlands Metro passengers to access the city centre while the track connection works take place for a short period during the summer. Metro services are set to return to their regular terminus before autumn 2021 with the work in Lower Bull Street expected to be completed by spring 2022.

Sophie Allison, Head of Business Transformation at Midland Metro Limited, the operator of West Midlands Metro said: “Passengers should expect some localised disruption to our services in the city centre this summer. We will continue to work with partners to ensure that passengers are provided with details of the works and alterations to services. Our customer service team will publicise information later this spring which will enable those using trams to plan their journeys in advance.”

Midland Metro Alliance has been working with partners at TfWM, WMM and Birmingham City Council to keep those in the local area informed of these planned activities via their dedicated Engagement Team, including writing to all schools, university and colleges in Birmingham to help students plan their journeys during term times. Further information for stakeholders and the travelling public will be shared in coming weeks as these key works ramp-up.

Anne Shaw, Director of Network Resilience for TfWM, said: “The closure will be in place until spring 2022 so we are asking people making their essential journeys to allow extra time. Public transport will still be serving the city centre throughout the period of construction, but users will want to plan ahead to understand the impact on their individual trips in and out of the east of Birmingham.”

More information on the project can be found by visiting www.metroalliance.co.uk.