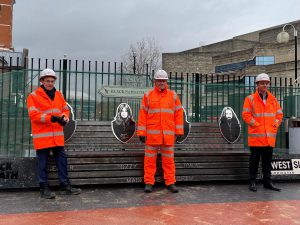 The Birmingham Westside Metro extension to Edgbaston has marked a major first following the beginning of the installation of a new tram stop along Broad Street in another momentous step forward for the project.

The first of three new tram stops for phase two of the extension is now being installed on the “golden-mile” as construction on the light rail project moves to a new stage.

Peter Cushing, Director of the Midland Metro Alliance, welcomed Andy Street, Mayor of the West Midlands and Charles Toogood of Brindleyplace on a site visit where they also saw the final ten metres of track on Broad Street being welding into place and took a seat on the Black Sabbath bench – a local landmark which was returned to area overnight as paving works were completed.

Speaking at the site of the tram stop, which will serve the city’s night-time entertainment district, Andy Street, said: “That we are celebrating yet another milestone for this important project, even as we navigate through these difficult times, is a brilliant achievement. The installation beginning on the first tram stop along Broad Street is a clear sign that we are entering the final stage of construction, bringing us closer to unlocking the significant economic benefits the extension will bring to every part of our region. This extension is a key part of our plan to recharge the region’s economy as we recover from the impact of Covid-19, and it is exciting to think people will be using this stop as early as next year.” 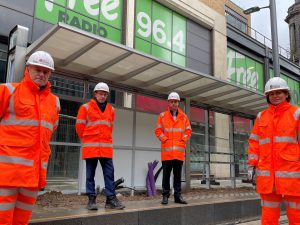 When the route opens in late 2021, three new tram stops will connect passengers to Brindleyplace, Five Ways and Hagley Road. It will follow from the current Library terminus, which opened for passenger service ahead of schedule in December 2019, providing links to popular tourist attractions including the Birmingham Museum & Art Gallery, the International Convention Centre and Symphony Hall.

Councillor Waseem Zaffar, Birmingham City Council Cabinet Member for Transport and Environment, said: “The improvement in transport links that this project will provide will no doubt have a positive impact on the city and it is fantastic to see that such great strides have been made in construction over the past few months. The extension will allow those living, working and visiting Birmingham to enjoy city centre attractions, such as the entertainment and hospitality offerings in Brindleyplace and Broad Street, by an additional form of sustainable public transport. I’d like to thank the team at the Midland Metro Alliance for their continued efforts.”

Raj Rajput, Managing Director, Asset Management at Hines, said: “The Birmingham Westside Metro extension has a crucial role in connecting Brindleyplace to the people and places of the West Midlands and the installation of the new tram stop beginning at Brindleyplace is a key milestone. This new stop on Broad Street will help connect our workers and visitors to the rest of the city and the region, with access to New Street railway station and Grand Central in just a few minutes. It also helps put Brindleyplace on the public transport map of an ever-expanding tram network.” 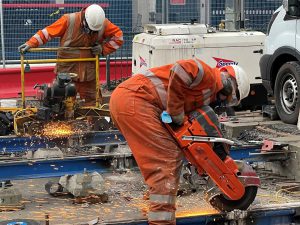 Construction on the project has continued throughout the Covid-19 crisis after further government guidance was implemented to ensure the safety and wellbeing of the public and the team.

Peter Cushing, Director of the Midland Metro Alliance, said: “It is incredibly exciting to celebrate the first tram stop shelter beginning to be installed on Broad Street. Construction has been escalated in areas during the pandemic in order to benefit the businesses so it is great to see the team’s hard work now starting to pay off. All at the alliance share great pride in delivering such a transformative tram extension for the city and we are all delighted to see the area beginning to take shape.”

Throughout the remainder of 2020, those in the area will notice construction moving to a new stage as site fencing is removed in places and activity moves to the installation of paving and street scene improvements. For any further information about the work, including any traffic or pedestrian changes, please visit: www.metroalliance.co.uk