Plans to extend the Midland Metro through Birmingham city centre have reached a new milestone. The Midland Metro Alliance has formally applied on behalf of the West Midlands Combined Authority (WMCA) for a Transport and Works Act Order to build and operate the Birmingham Eastside extension from Bull Street to Digbeth. 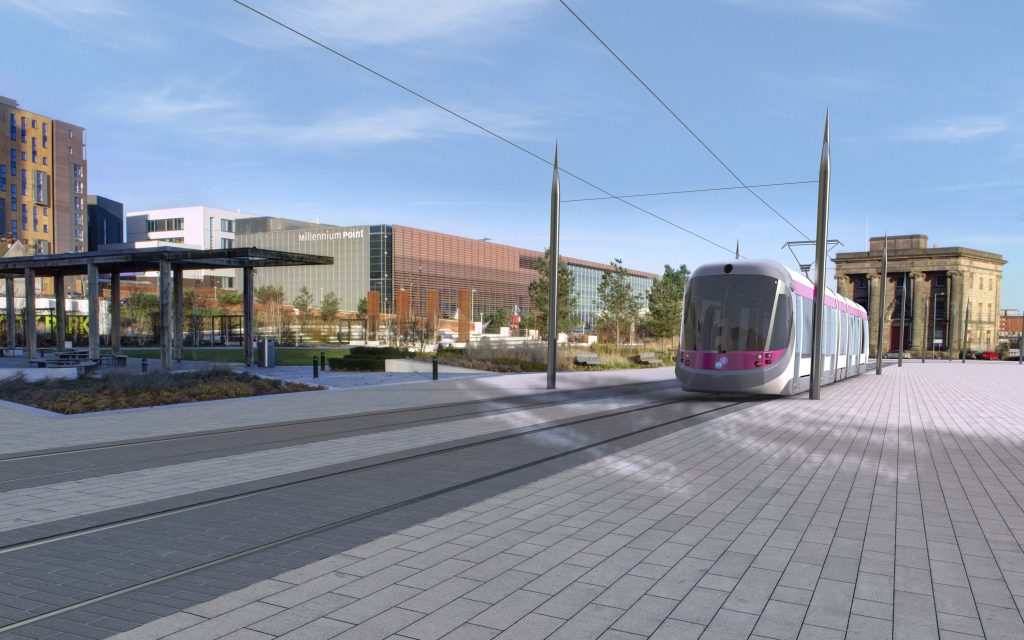 Once granted, the order would allow work to start on the 1.05 mile (1.7km) extension which will serve the proposed HS2 station at Curzon Street, offering connections to New Street, Moor Street and Snow Hill train stations.

Subject to any local public inquiry, work is scheduled to begin in 2019 and the line to open in 2023.

Cllr Roger Lawrence, lead member for transport on WMCA, said: “The Birmingham Eastside extension will provide a direct high-quality link between the significant areas of commercial and leisure activity to the east of the city centre and the Jewellery Quarter and the Black Country.

“It will not only improve access for existing business travellers and commuters but also provide easier access to jobs for the unemployed, further encourage tourism and leisure travel.

“This will help spread economic benefits from HS2 and local developments, which will increase economic opportunities across the West Midlands.”

The route will start at the junction of Bull Street and Corporation Street and run along Lower Bull Street past the southern edge of the proposed Martineau Galleries re-development to Albert Street.

It will then cross Moor Street Queensway towards Curzon Street and continue along New Canal Street before running into Meriden Street and turning left onto Digbeth High Street.

There will be four stops on the route. A stop in Albert Street will serve the proposed Martineau Galleries Phase 2 development and the HS2 Curzon Street Station West Entrance.

A stop on New Canal Street is proposed underneath the HS2 Curzon Street station serving Eastside and the HS2 East Entrance.

The third, on Meriden Street, will serve the heart of Digbeth and the proposed development at Typhoo Wharf.

The terminus stop will be on Digbeth High Street at the junction with Milk Street, serving Birmingham Coach Station, South and City College and the Custard Factory.

Seven new trams will be bought to bolster the current fleet of 21 and provide a service running every six minutes.

The work will be carried out by the Midland Metro Alliance, a team of planning, design and construction specialists working with WMCA. It consists of rail construction specialists Colas Rail – with Colas’ partners Colas Ltd, Barhale, Thomas Vale and Auctus Management Group – and a consortium of design experts from Egis, Tony Gee and Pell Frischmann.

Midland Metro Alliance Director Alejandro Moreno said: “The development of this route will play a key part in helping to unlock the potential of the Eastside of Birmingham and will be an important part of the regeneration in this area.”

Work is now underway extending the route from New Street Station to Centenary Square, with services expected to start running in 2019. Funding has also been earmarked for the line to go further along Broad Street, past Five Ways and on to Edgbaston by 2021. In Wolverhampton work has begun on the city centre extension, with completion scheduled for 2019.

The route will take trams along Pipers Row, stopping directly outside the bus station before continuing on to the railway station which will also be redeveloped as part of the Wolverhampton Interchange Project. A route linking Wednesbury to Brierley Hill is also being developed and work on this could start as early as next year.