Work which will revive Birmingham’s ‘creati 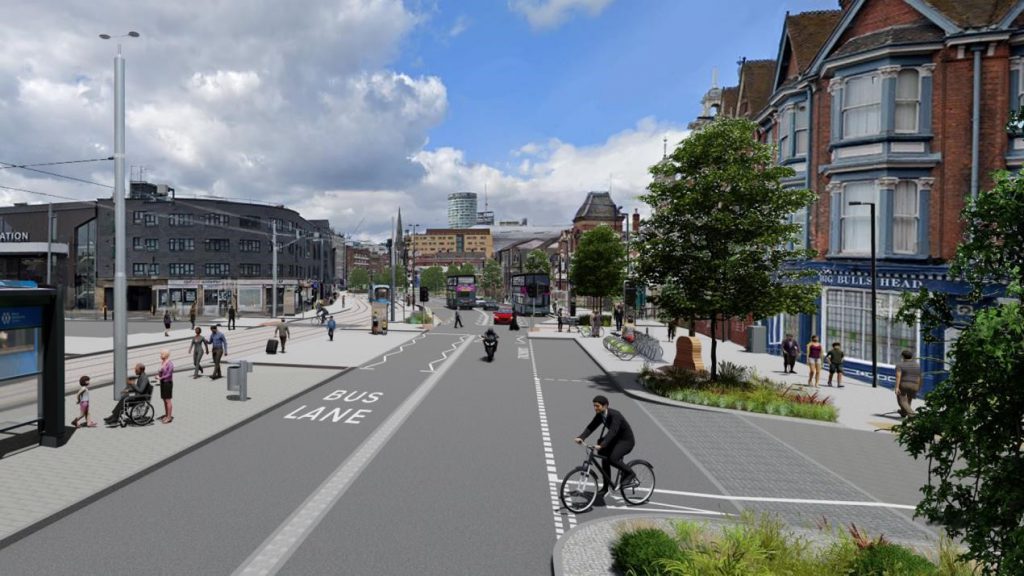 ve quarter’ with a refreshed look and feel and sustainable transport links gets underway next week as Midland Metro Alliance begins preliminary construction on the Birmingham Eastside Metro extension on Digbeth High Street.

Activity, which will begin from 6 July, is set to transform Digbeth High Street through the creation of public spaces and with a new West Midlands Metro route into the city centre.

The Birmingham Eastside Metro extension is being planned, designed and delivered by Midland Metro Alliance (MMA) on behalf of Transport for West Midlands (TfWM), and the organisation is working with partners to promote traffic changes which will be implemented as construction begins.

Construction in the area will be carried out in three phases:

At all times, two-way traffic in and out of the city will be maintained, although people are being asked to plan their journeys and avoid peak-time travel, if possible.

Stephen Christopher, Construction Director at MMA, said: “It is fantastic that work is beginning to be more visible for the Birmingham Eastside Metro extension with work now underway in Lower Bull Street in the city centre and about to begin on Digbeth High Street. There will be some unavoidable disruption, so we are working with Birmingham City Council and TfWM to keep those living, working and visiting the area informed of our plans.”

Tim Pile, Chair of Greater Birmingham and Solihull Local Enterprise Partnership (GBSLEP), said: “The preliminary construction which is set to begin next week will deliver a major improvement to the heart of the Eastside and will transform how visitors, businesses and residents use the area. As a LEP creating better places for our residents to live and work is fundamental to our mission of driving forwards inclusive economic growth. Our unique triple helix structure of bringing local government, businesses and educational organisations together means we are working with Birmingham City Council to ensure Digbeth High Street is fit for the future.”

Ian MacLeod, Director of Inclusive Growth at Birmingham City Council, added: “We consulted with the public on the plans for Digbeth High Street early last year and received overwhelming support from respondents. The Eastside Metro extension is absolutely key to support the significant growth planned for this part of the city. We will work closely with our partners to keep the network moving.”

The Metro will be realigned to allow for wider pavements, better cycle routes and increased cycle parking along the corridor. These enhancements will make the area more attractive for pedestrians and residents, increasing footfall, supporting future commercial investment and growth in local businesses.

Midland Metro Alliance has been working with partners to keep those in the local area informed of these planned activities, including issuing an updated leaflet on Birmingham City Council’s plan for the area to businesses in Digbeth High Street. In addition, the alliance’s dedicated Stakeholder Liaison Officer continues to communicate with businesses in the area to keep them up to date with the construction schedule and to offer support including assistance with receiving deliveries.

Anne Shaw, Director of Network Resilience for TfWM, said: “With many projects now underway and with the expected increase in passengers 2022’s regional spotlight will bring, it’s important to recognise that travelling by public transport is still the most efficient way to get around the city. There are works in place which will add some delay to journeys, but we are asking the travelling public to continue to plan their journeys using real-time information and allow extra time.”

The £227m Birmingham Eastside Metro extension, will run from Bull Street, in the city centre, to Digbeth, adding four new tram stops to the Metro network. More than half of the 1.7km route is planned to be free of overhead wires, similar to the recently opened extension from Grand Central to Centenary Square.

For further information on travel advice for the Eastside of Birmingham city centre, visit: tfwm.org.uk/eastside