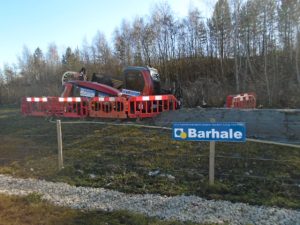 Civil engineer and infrastructure specialist Barhale Ltd has completed the first phase of the strategically important Waverley scheme in Sheffield on behalf of Yorkshire Water and supported by our design partner GHD and specialist Ken Rodney Construction. The infrastructure works, which are necessary to accommodate housing and commercial growth in the Waverley area of Sheffield, have included the challenging negotiation of several busy roads including the A630 linking Sheffield city to the M1 Motorway.

This complex project sees new twin and triple rising mains installed in 225mm and 250mm Polyethylene (SDR 17) pipe from Poplar Way to Europa Link. The 827 metres of new pipeline has been laid using a combination of open cut and directional drilling and also includes the installation of a washout chamber, air valve chambers, four valve chambers and three hatchbox chambers.

Andy Laughton explained that the site had presented a series of challenges. “As you might expect in a busy urban environment, there have been many considerations beyond just getting the pipes in the ground.”

“This has meant dealing with multiple service crossings, including Intermediate Pressure Gas, working across land in multiple third party ownerships and the need for directional drilling underneath some of Yorkshire’s busiest roads – including the A360, a main thoroughfare between the motorway and the city centre.”

Phase Two of the project will lay a further 2147 metres of new gravity pipeline, installed by open-cut / guided auger-bore and micro-tunnelling techniques. Modifications and upgrades are to be made to the local sewage pumping station to deal with the increased flows from the new 3000 properties being developed. Target completion is March 2020.