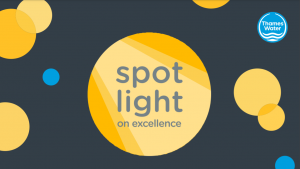 Thames Water received 110 entries in total for the awards, 9 of which were from Barhale. 5 of our entries were shortlisted as finalists.

At the awards ceremony on Thursday 1st July, we found out that 2 of our 5 finalists won their categories.

Congratulations to the Tunnels and Aqueducts team and Andy Simpson (Construction Manager, Southern Region) for winning their categories.

The ceremony saw Thames Water’s supply chain recognised for their delivery and efforts over the past year. David Wylie, Commercial and Procurement Director, hosted the ceremony and various members of Thames Water’s senior leadership team spoke about the different categories, as well as CEO Sarah Bentley, who spoke about the role that the supply chain play in being part of ‘Team Thames’.

The Tunnels and Aqueducts team’s efforts, accelerating the programme on their Merton to Surbiton section of works in order to complete within 10 days, as opposed to the originally planned 6 weeks, were recognised in the ‘Be respectful and value everyone’ category. The winning nomination was seen by Thames Water as a great example of how the relationships and skills of a diverse, inclusive team, comprising of 16 nationalities from 4 continents can deliver outstanding results. This had been recognised by Sarah Bentley during a visit to the site.

Andy Simpson won the ‘Take care’ award further to numerous examples of him demonstrating that the health, safety and wellbeing of everyone around him is a number one priority for him. His commitment to this had seen his site team praised and awarded a maximum score during a site visit by Thames Water’s Health and Safety Manager. His collaboration with the Barhale HSEQ team to implement an exemplary series of measures to protect his colleagues and give them peace of mind after the COVID-19 pandemic began was also highly commended.

Well done to the Tunnels and Aqueducts team and Andy!

Not only did we win two awards, but Mirand Ferizi (Site Agent) also had a special mention by David Wylie at the end of the award ceremony, with David saying he wanted to recognise the fact that Mirand had been nominated for two separate awards and that his and Barhale’s work was reflected well in the nominations.

Listed below are the selected finalists and winners for the awards:

Well done to all!