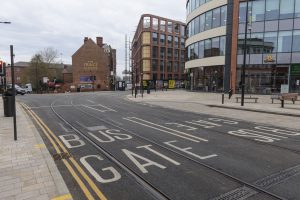 The Wolverhampton City Centre Metro extension will move closer to completion when the final stages of construction get underway during the spring and summer months.

Midland Metro Alliance (MMA), working on behalf of Transport for West Midlands (TfWM), will return to the city centre to carry out a series of works to complete the scheme including laying the final sections of track outside the revitalised Station Plaza when the city’s new railway station is complete.

The start of the final phase of the project follows the successful completion of works, including track laying and road resurfacing, along Pipers Row and Railway Drive in 2019 before a pause in the project to allow the station works to begin.

Construction is expected to commence from Monday 15 March with works to extend the footpath along Bilston Street. During this time, one lane will be closed to traffic, while pedestrians will be advised to follow a short diversion route via the subway.

Paul Brown, MMA Construction Director, explained: “Our return to Wolverhampton to complete the final stages of construction for the Metro extension signals a really important step in the project and I am delighted that these works are now getting underway. When complete, the Wolverhampton City Centre Metro extension will provide a much-needed boost to public transport by allowing people to easily change between train, tram and bus. We do appreciate that our works can cause disruption and we will continue to work closely with the City of Wolverhampton Council, Wolverhampton Business Improvement District and our partners at Transport for West Midlands to minimise impact wherever possible.”

Further activity will take place throughout the spring and summer months, including finishing works along Pipers Row, with traffic flow maintained at all times under temporary traffic lights and work at St George’s Parade, which will involve the reversal of traffic via Snow Hill.

Further details on traffic measures will follow in due course and those travelling through the city centre are being advised to leave more time for their journeys while construction is underway. 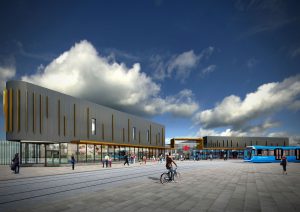 Anne Shaw, Director of Network Resilience at TfWM, said: “These final activities in Wolverhampton are expected to be less disruptive than previous works but they do come at a time when Covid-19 restrictions are slowly being lifted and more people are making daily journeys again. With this in mind, we’re urging all those travelling through the city centre to think about their journey and allow additional time for any traffic management measures which may be in place, either in the road or footpaths.”

Midland Metro Alliance, together with local authority partners and TfWM, is committed to delivering Metro extensions across Birmingham and the Black Country as part of a collective aim to improve public transport in the region. Following the government’s clarification that construction is able to continue during the pandemic, activities will continue to take place with an abundance of caution and the safety of teams and the public in mind. In a further attempt to protect its staff, the MMA has also rolled out regular lateral flow testing to all those working on the projects.